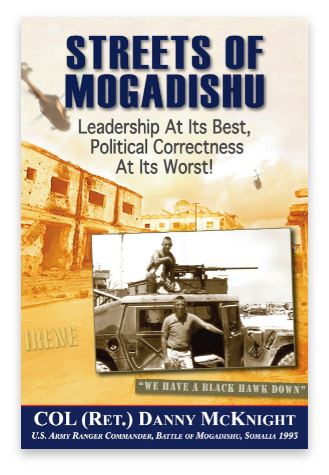 On October 3, 1993 in the most dangerous part of Mogadishu, Somalia the men of Task Force RANGER became involved in the most intense combat for American troops since the Vietnam War.

Streets of Mogadishu addresses not only this situation commonly referred to as Black Hawk Down, but also the untold stories of that military engagement, the real events of Task Force RANGER combat operations from leadership to the negative impacts of political correctness on military decisions.

“COL Danny McKnight, one of the heroic figures of the battle of Mogadishu, has written a superb leadership primer for all chiefs and up-and-coming leaders, which will serve them well from the battlefield to the boardroom.”
WORLD DEFENSE REVIEW

Save this product for later
Display prices in: USD